On behalf of the charity Mercy Ships, Stena RoRo has been responsible for the construction of the Global Mercy, the world's largest civilian hospital ship. The ship has now been ceremoniously inaugurated in Dakar, Senegal. While the celebrations were still underway, the crew had already begun with the ship's first mission in strengthening African healthcare. 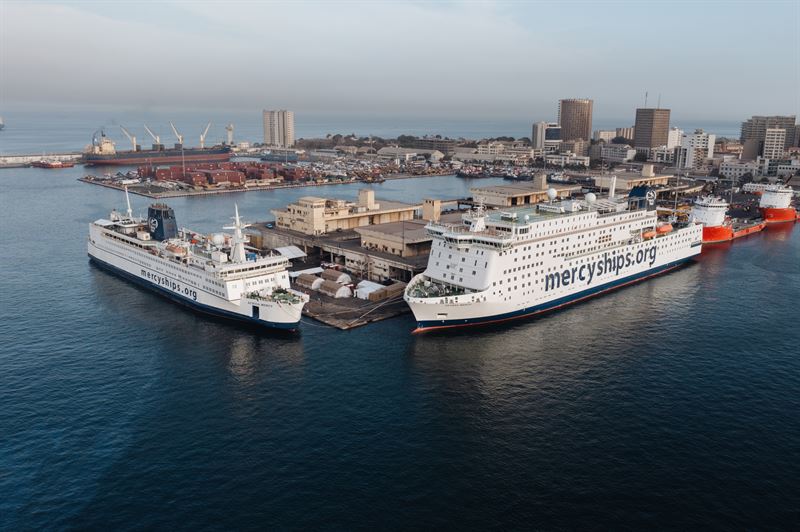 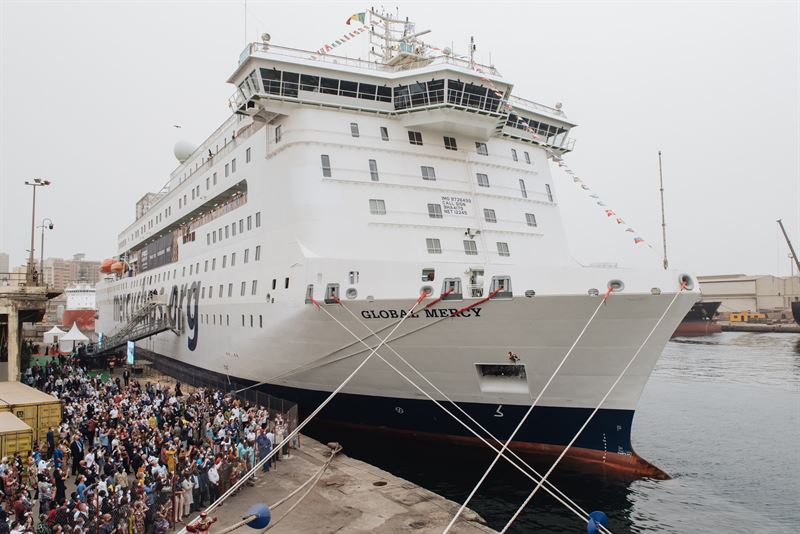 Stena RoRo specializes in designing ships for special needs. Project management for the construction of the Global Mercy has been underway since 2013 and has involved several European, American and Asian subcontractors. Construction was carried out at the Tianjin Xingang shipyard in northern China where Stena RoRo had an international team on site for monitoring the construction process.

Per Westling, managing director for Stena RoRo, was present at the inauguration of the vessel in Dakar.
“For us, this marks the end of our extensive involvement in a major, multi-year project. For Mercy Ships, the inauguration marks the beginning of something new. With the Global Mercy in full operation, the organization's ability to help the less fortunate in need of care more than doubles. They are doing a fantastic job and we are very proud and happy to have been a part of it.” 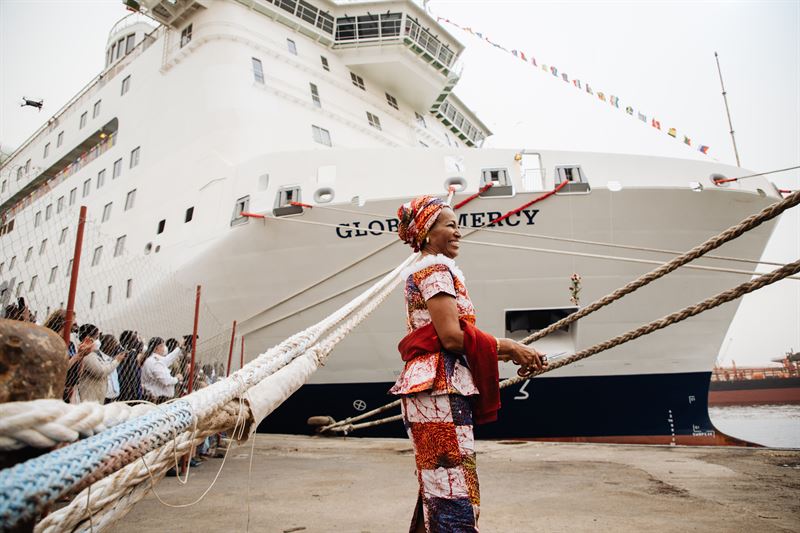 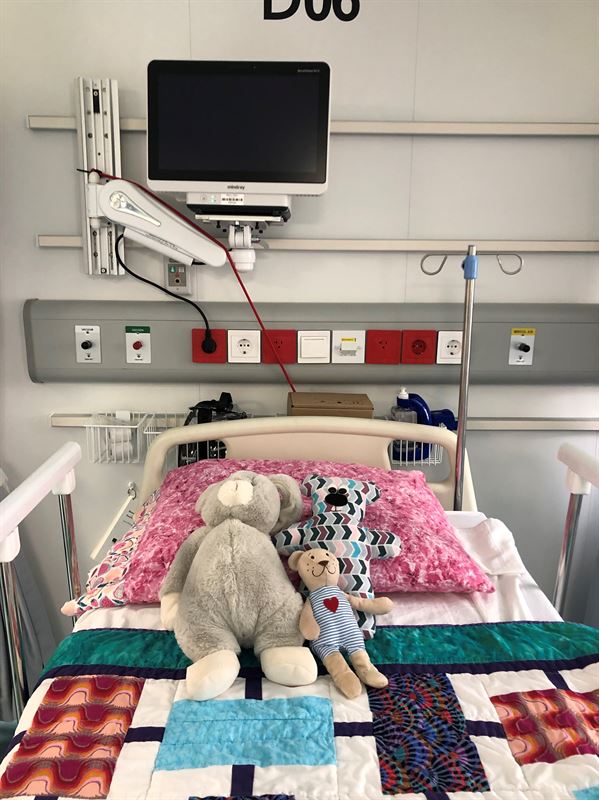 Very special requirements
Building a ship with capabilities for both sea voyages and hospital care in port is very demanding. Stena RoRo based the design on its concept for RoPax ships – combined passenger and cargo ships for international travel – and modified it into a pure passenger ship with hospital capabilities. Both the hull form and interior layout are specially designed, and the ship features a custom ventilation system. Particular care has been taken to minimizing vibrations and noise.

“We removed car decks and built operating theatres and hospital wards instead,” Per Westling explains. “The ship has space for 200 hospital patients. In port, 950 people can be accommodated and the ship is equipped with everything needed for both in-patients and those working on board, including schools and kindergartens for the volunteers’ children.“ 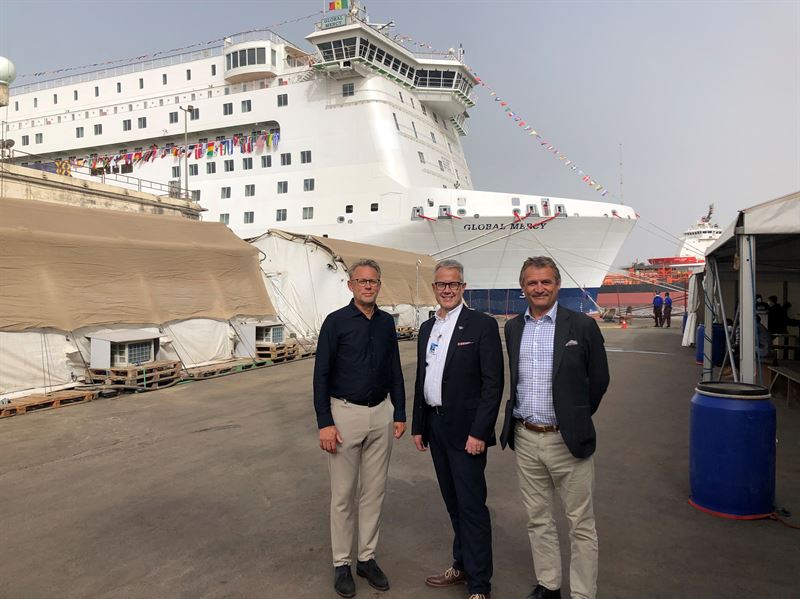 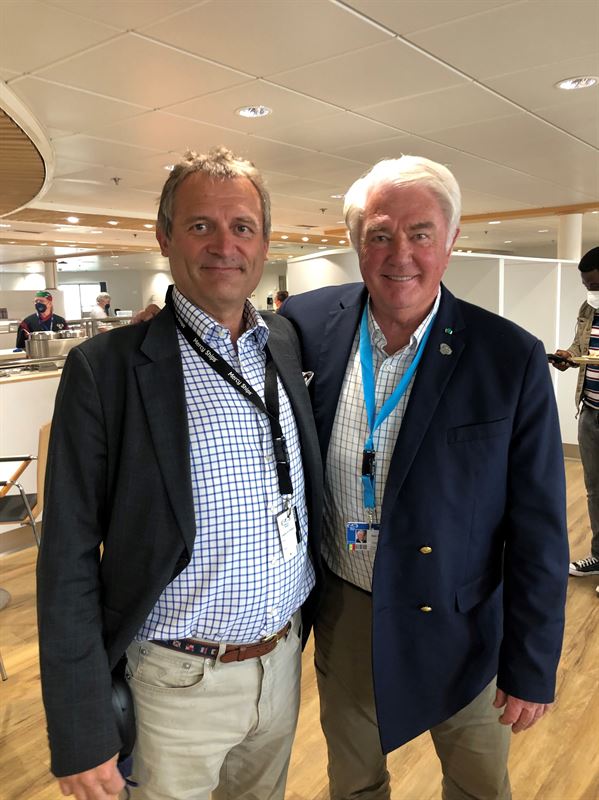 Training for local healthcare professionals
The Global Mercy also has very modern training facilities, and they are already in use. In addition to providing surgical and other care, Mercy Ships trains healthcare professionals and strengthens the health infrastructure in the African countries in which it operates. The inauguration ceremonies for the Global Mercy were not even completed when the crew began the ship’s first mission on the African continent: training more than 260 Senegalese healthcare workers in surgical and anesthesia skills, for example.

The Global Mercy is the first of Mercy Ship's vessels to have been designed and built specifically for their needs. The new ship will operate alongside the Africa Mercy, which has been in service since 2007. With both ships, Mercy Ships expects to be able to conduct more than 5,000 operations each year, treat over 28,000 dental patients and train more than 2,800 local healthcare employees.

A global project under Swedish management
The project started back in 2013. Swedish Stena RoRo has been responsible for the design, contracting and execution of this unique and global project. French Barry Rogliano Salles, BRS, has served as the broker; detailed design was by Finnish Deltamarin; and construction has been carried out at the Tianjin Xingang shipyard in China. The Global Mercy, classified by Lloyd's Register in the United Kingdom, will sail under the Maltese flag and operate along the coast of Africa.

About the Global Mercy
Global Mercy is 174 meters long, 28.6 meters wide and can accommodate 200 patients. It has six operating theatres, a laboratory, general outpatient clinics, a dental clinic and an eye clinic. The hospital section amounts to 7,000 square meters. The vessel is also equipped with ​very modern training facilities. In full operation docked in port, the Global Mercy will be able to accommodate up to 950 people, including crew members and volunteers from around the world.

1. Global Mercy and Africa Mercy side by side in the port of Dakar, Senegal

2. Gathering on the quay for the blessing ceremony in Dakar

3. Dr. Juliette Tuakli breaks a vase of flowers against the Global Mercy's bow during the blessing ceremony.

4. Hospital ward on board Global Mercy

Since 1977, Stena RoRo has led the development of new marine RoRo, cargo and passenger concepts. We provide custom-built vessels, as well as standardized RoRo and RoPax vessels. The company leases about fifteen vessels to operators worldwide, both other Stena companies and third parties. Stena RoRo specializes above all in applying its technical expertise to the design and production of new vessels and the conversion of existing vessels for providing tailored transport solutions to its customers. We call this “Stenability”. Since 2013, we have had responsibility for the design and completion of Mercy Ships’ new hospital vessel the Global Mercy – the world's largest civilian hospital ship. The ship was delivered in 2021.
www.stenaroro.com